A brief history of Aksel Holmsen

Norwegian Aksel Holmsen is known for the production of fine metal jewellery, usually in silver or gold.

In 1889 he began working for the Norwegian silversmith David Andersen as an apprentice. At first he was trained in filigree work, which is the working of fine metal wire into delicate decorative patterns. By 1901 he had completed his overall training and continued to work for David Andersen until 1904.

Around 1906 he established his own silver and enamel workshop in Oslo, where he became a successful, major supplier of enamel and silver jewellery throughout the world. 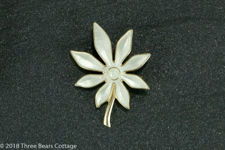 A gilded, Sterling silver and white enamel brooch by the Norwegian silversmiths. Second-hand.
€56.00 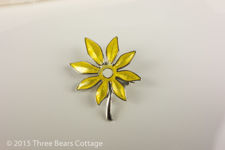 A Sterling silver and yellow enamel brooch made by Aksel Holmsen. Second-hand.
Sold.
▲