Rye Art Pottery was founded in 1956 by David Sharp and his friend George Gray.

David had previously worked at the similarly-named Rye Pottery and perhaps because Rye Pottery talked of legal action over the name, Rye Art Pottery was renamed Cinque Port Pottery instead.

Cinque Port Pottery was a successful venture, with George Gray as the businessman and David Sharp as the artist.

By the start of the sixties they were employing 15 workers. The partnership became a limited company as Cinque Ports Pottery Ltd (the new use of the plural 'Ports' reflected how people referred to them).

Despite the success of the company, George and David had different ideas on how they should proceed and in 1964, they agreed to part company. David helped acquire new premises for George and remained at the Cinque Ports Pottery premises "The Mint". Happily their friendship continued for the rest of their lives.

George retained the Cinque Ports name and moved into his new premises, "The Monastery". He made domestic wares that would prove popular and sell well. He even bought a small pottery in Stoke on Trent to supply biscuit ware to Cinque Ports, due to the limited space of the Monastery. However, transportation problems made this less successful.

The business expanded successfully into the eighties, by which time George's age and other business interests led him to hand the pottery over to a younger man. So Jim Elliot took over, trading initially as Cinque Ports Pottery (without the 'Limited') and then later as Cinque Ports Ltd (without the 'Pottery'). 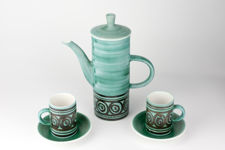 A coffee pot with two cups and saucers from the Cinque Ports Pottery in Rye. Second-hand.
€46.00 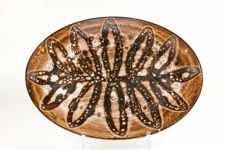 An oval platter from the Cinque Ports Pottery in Rye. Second-hand.
Sold.
▲