In 1856 George Jones opened a pottery workshop in Glebe Street, Stoke on Trent.

Around 1865 he built the Trent Potteries, next to the Newcastle-under-Lyme canal and then in 1873, the company was renamed George Jones & Sons.

George died in 1893 but the business continued and in 1907, it was renamed Crescent Potteries. 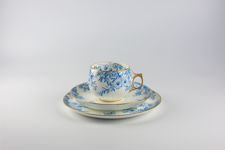 A Staffordshire, bone-china trio of teacup, saucer and plate by George Jones & Sons in their "Spring" pattern. Second-hand.
€38.00
▲