A brief history of Holmegaard glass

Holmegaard are a Danish manufacturer of glassware. Until 1965, the story relates to two glassworks, Holmegaard and Kastrup.

In 1823 Count Christian Conrad Sophus Danneskiold-Samsoe petitioned King Frederik the 6th of Denmark to start a glassworks at Holmegaard Moor (Holmegaard Mose), which was a peat bog 50 miles from Copenhagen. In 1824 the dowager Countess Henriette Danneskiold-Samsoe receives permission and commissions the Norwegian glassmaker Christian Wendt to found the Holmegaard factory in 1825, where they produced glass bottles.

In 1846 the Kastrup Glasvaerk is founded by Holmegaard, at Amager where it specialised in bottle production. Bottle making at the Holmegaard Glasvaerk ceased in 1857.

Between 1848 and around 1890 the well-regarded glass engraver Wilhelm Iserhorst is known to be working for Holmegaard.

In 1873 Holmegaard actually sells the Kastrup Glasvaerk, creating the newly-formed AS Kastrup.

In 1906 Holmegaard's Margrethe  range of wine glasses is designed by Svend Hammershoi.

In 1907 the three glassworks at Fyens Glasvaerk, Arhus Glassworks and Kastrup merged to form Kastrup Glasvaerk.

Between 1927 and 1941 Jacob E. Bang has his first period of employment, at the Holmegaard Glasvaerk.

In 1942 Per Lutken takes the place of Bang at Holmegaard Glasvaerk.

Between 1957 and 1965, Jacob E. Bang worked at the Kastrup Glasvaerk as art and design consultant.

In 1965 the Holmegaard and Kastrup factories merged, creating a new company under the name Kastrup and Holmegaards Glasvaerker. Labels reading "Kastrup Glas" will therefore date the item before then.

In 1979 production at the Kastrup Glasvaerk comes to an end.

In 1990 Holmegaard Glasvaerk separates again to become Holmegaard Emballage AS.

In 2004 a management buyout takes place and Holmegaard Glasvaerk becomes part of Holmegaard Entertainment AS, packaging the workshops and factories and visitor attractions and historical exhibitions.

In 2008 the rights to produce and market under the brand Holmegaard Glasvaerk is acquired by the Rosendahl Design Group. Today they're still in production and are a well-regarded and sought-after maker of handblown and machine-made glass. 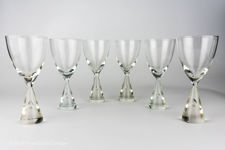 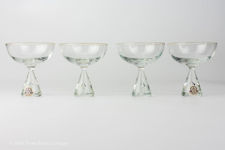 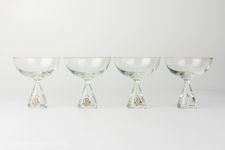 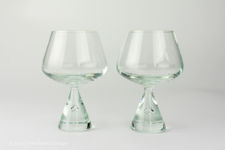 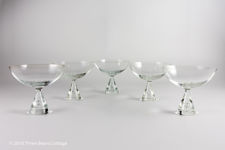 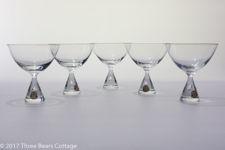 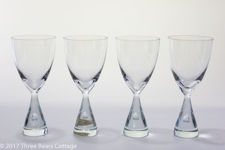 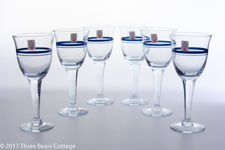 A set of six decorated wine glasses by the Danish maker. Second-hand.
€56.00 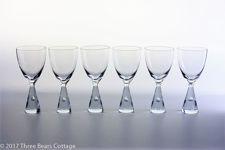 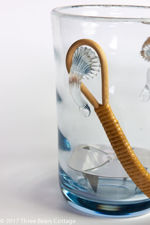 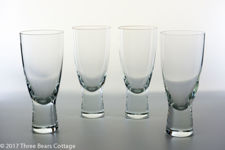 A set of four beer or water glasses in clear glass, designed by the master glass blower. Second hand.
Sold. 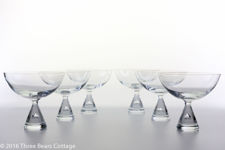 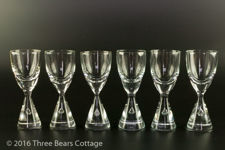 A set of six single-shot, aperitif or liqueur glasses by Holmegaard, for their Princess range. Second-hand.
€48.00 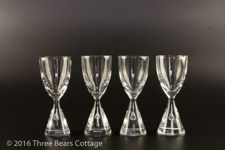 A set of four single-shot, aperitif or liqueur glasses by Holmegaard, for their Princess range. Second-hand.
€40.00
▲